Do You Know Who Patsy Kelly Was? – Vanda
2

Do You Know Who Patsy Kelly Was?

For a long time, most Hollywood actors (and people for that matter) were not out.  To openly proclaim oneself to be a gay man or a Lesbian was to commit professional suicide and it could also put your life in jeopardy.  However, there was one…

During the thirties and forties, Patsy Kelly was a successful comedienne in Hollywood movies; she played goofy maids and salty sidekicks.   She also was one of the very rare almost out Lesbians of her time.

Doing the research for my novel required a lot of reading about “gay” Hollywood.  That’s how I stumbled upon Patsy Kelly.  In the thirties and forties, she didn’t actually announce that she was a lesbian, but she didn’t hide it, either.  She went from being the critics’ darling between 1933 and 1943 to pretty much forgotten from 1943 to 1960 when she made no movies.

Syndicated columnist, Lee Graham summed it up by saying that she went out with “mannish women, wore slacks in public, cursed and swore and told off-color jokes at lesbic bars (I love this word ‘lesbic’) and clubs.”  She was considered a scandal waiting to happen so the jobs pretty much dried up. (McClennan, 2000).

Tallulah Bankhead came to her rescue in the fifties by hiring her for small parts in plays she was doing.  Later Patsy became “Tallu’s”  paid personal companion, which sometimes required her to “provide services” for her generous employer and friend.  After 1960 Patsy started to get hired for secondary roles. 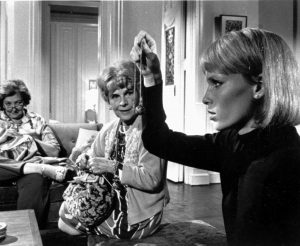 The most famous of her later films was Rosemary’s Baby in which she played a witch and friend to the weird neighbor across the hall played by Ruth Gordon.  (Ruth Gordon is loved for her role as Maude in Harold and Maude and she is one of my absolute favorites. I actually met her backstage on the day they were closing her Broadway show, Dreyfus.  A memorable moment for a wide-eyed kid who’d just arrived in the City)

Patsy was the only actress out of ten who admitted to Boze Hadleigh in 1979, without angst, that she was a “dyke.” (Hadleigh, 1994)

From the 1938 movie “There Goes My Heart”: Patsy Kelly sings the praises of a device called “Vibrato”–“for that morning-after feeling.” Was it intended innocently, or were the filmmakers trying to slip something past the censors? You be the judge…
Click Here to Leave a Comment Below 2 comments

She is a lost treasure. Thanks, Vanda!

Yes, she is. Nice seeing you the other day.