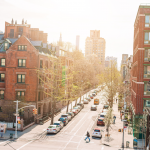 Last night I was with my writing group, The Oracles, some of the most amazingly talented writers I have ever known.  I am so thrilled to be included in their number.  I’m always grateful for the helpful feedback they give me. They’re all playwrights. I am too, only now I’m finishing up a novel. The novel has so much dialogue in it that they graciously let me cast it with fabulous actors so that it can be read at the group for feedback. Last night we finished reading one of my chapters from JULIANA and someone in the group asked if they had “brunch” in New York City in 1943. An excellent question and one I had not considered. (They often send me back to the drawing board to check my facts.) This set me on a course of late night researching until I came up with the answer to that question.

Here is the answer:

There actually was a guy who started the whole thing.  In England in 1895, Guy Beringer thought there should be an alternative to the “postchurch ordeal of heavy meats and savory pies” (Grimes, 1998).  He thought there should be a meal served at noon that consisted of tea or coffee, and marmalade.  He considered this later, lighter meal would make it easier for the Saturday late night “carousers.”  Well, the idea took off.

Brunch didn’t come to the U.S. until after World War I,  but they definitely had it in 1943.  In the forties, the Fifth Avenue Hotel and Ninth Street had what they called the “Sunday Strollers’ Brunch.”  They served sauerkraut juice, clam cocktails, chicken liver omelets in Madeira and calf’s liver with hash browns (Grimes, 1998).

I love the detail! There nothing better than to make the reader want to visit or know they can visit or want to research a place. And New York has so many. Its grounding.

I enjoyed this. I have a novel coming out, Imogene’s Eloise, that takes place in NYC in the late ’60’s – early ’70s. Even though I lived there then, many of the places I mention no longer exist. Historical accuracy is important and I applaud those who take the time to get it right. Brava!

Marguerite, Yes, there have been many changes since the sixties. I’m finding the best way to get a sense of how things were in the forties is to read original sources. I found a wonderful guide book for soldiers and sailors arriving in NYC for the first time during the war. I learned much more from that than anything on the internet or books written today (which can be quite inaccurate) All the best with your novel. Vanda

Brilliant! I never thought of when “Brunch” came about….your attention to detail is fantastic! And greatly appreciated by fellow history buffs!! New York is one of those few places where we can go and experience firsthand where history “happened.” Brings us full circle!

Now who asked that question? Thanks for your lovely comments about Oracles. Can’t wait to hear the next installment of your remarkable novel.

You know, I don’t remember who asked the question. I just remember the question sticking with me so that I had to know the answer. Thanks for commenting.

I have wondered about the origins of brunch- and it’s interesting to me that it started where I had my wedding reception. I obviously didn’t know.

Nice hearing from you Anne. Thanks for commenting. Vanda