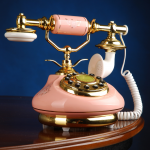 When I was small I would hear my grandmother yelling into the phone. “Get off the phone.  I need to use it.  You’ve been on the line too long.”

And sometimes the other woman would yell back, “Stop listening in on my call!”  It was just another argument with the woman who shared Gram’s phone line.  Yes, Gram had to share her phone line with one or two other people she didn’t know and had never seen; when they were using the phone Gram could not.  This was a party line and it caused lots of arguments. So why did people back then have a party line? Because a party line was much cheaper than a private line. 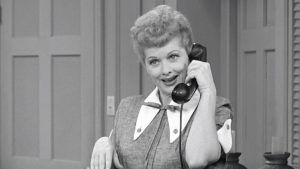 If you’ve watched re-runs of “I Love Lucy,”  and who hasn’t, you’ve heard Lucy argue with the other party who won’t get off the line.  It’s funny and it works as a comedy bit, but it never could’ve really happened at that time.  Lucy was making her calls on the Eastside of Manhattan in the 1950s. New York City had abandoned the party-line in the 1930s.  The party line certainly still existed in the surrounding areas, like Long Island where my Gram lived, but not in New York City.

Despite Lucy’s party line calls being an anachronism, the show preserved a bit of our everyday history.

What about your Grandma or your Great Grandma? Share on this site.

Vanda
I adore I Love LUcy When a child I only heard about party lines but they were recent history at that point I would have loved to live in that era .The party line I guess was the old version of our chat rooms on the net

In Staten Island, we still had party lines well into the late 40s. I remember several instances of my mother arguing with people who shared our line. At one point we were linked with an Italian chicken market. People would call to order freshly-killed chicken and eggs. The owners of the market
were Italian as were the customers. One day my aunt was trying to reach us and when a man answered with a thick accent, “Chicken Market,” for some reason she thought it was my father joking and said, “Let me speak to the head chicken, which led to a torrent of Italian confusion.

Eileen, that’s a great story. Thanks for sharing it. Wonderful to hear from you. Vanda