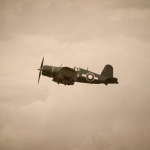 My mother’s hands were shaking. It was a sunny summer afternoon towards the end of WW II when we heard the engine of a small plane as it came across the bay. We ran outside, her with the binoculars and me holding the chart of colored drawings of every kind of plane that existed in the 40s. It was her job to report any enemy aircraft, as there was fear after Pearl Harbor that the Japanese carriers off the coast would send planes to bomb American cities on the West Coast.

Volunteers were organized to keep watch. Thousands of people, high school kids, retired folk, women whose husbands were still overseas fighting, and little kids like me who were unofficial helpers.

As the plane came closer, we held our ground, and soon the plane came into view flying very low. Oh my god, a red circle on the side could only mean one thing, we had spotted our first Japanese fighter plane. The pilot saw us and we saw him. I stood transfixed, a little afraid, but mostly excited. I wondered if he would shoot us. But, he didn’t shoot. Instead, he tipped his wing toward us and flew by in an arc, as if to say hello-goodbye, and then he headed back toward the Pacific Ocean.

Shareen Knight is a writer and artist/photographer who lives in the coastal mountains of British Columbia. She is writing a novel that takes place in the 40s and 50s in rural America where she was raised and is also working on a comedic/drama full-length play about the Inuit people and Global Warming. She claims to live in an igloo, but nobody believes her because the snow has all melted.