When Cars Drove Through the Washington Square Arch – Vanda
0

When Cars Drove Through the Washington Square Arch 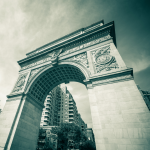 I’d love YOU to follow my blog. To sign up enter your email in the box to the right.

If you look at this post card from the 1940s the Washington Square Arch looks pretty much the way it does today.  But if you look closer  you will see that the cars are driving through the Arch.  When I bought this postcard from eBay it drove me a little nuts.  Was I seeing right?  Were those cars really going through the Arch?  I kept staring at it over days and weeks checking my perception.   Then I found an old film about New York transportation in the 1930s and 40s and a city bus drove right through the arch!  I went back over that bit of film a few times still thinking I’d seen it wrong.  After all the film was old with lots of cracking. But, yes, a bus did, indeed, go through the arch.  So why didn’t I check this out on the Internet before driving myself crazy?

Well, I tried.  But there is nothing really on it.  What is reported on is the fight between Robert Moses and Jane Jacobs in the late forties and early fifties when Moses had a plan to extend Fifth Avenue into the park.  These Internet articles are written as though there had been no traffic into the park previously, but Moses wanted to put it there.  Actually, Moses wanted to increase the traffic that was already coming into the park and Jane Jacobs wanted to stop him from doing that.  Thankfully Jane Jacobs and her committee won and in 1952 all traffic into the park was stopped.  But prior to this battle Washington Square Park had cars coming into it through the arch.

While thinking about this entry I frequently walked down to the arch and tried to picture cars going through it, but it was hard.  Granted, today there is a metal fence and posts that would prevent any vehicles from coming into the park, but if those were taken away how would they do it?  Standing in the freezing in the horrible cold, I tried to picture them fitting through that arch.  It must have been an awfully tight squeeze.  What do you think?