I Went Back to the Park Today: The Different Worlds Men & Women Enter – Vanda
2

I Went Back to the Park Today: The Different Worlds Men & Women Enter 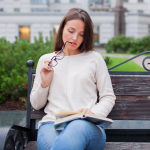 I went back to the park today. I hadn’t been there in a couple of years. Well, no, that’s not exactly accurate. Of course, I’d been there. I mean, really–I only live a block away; I walk through it all the time.  But today I actually sat down on a bench to read.  That’s what I hadn’t done in years. I needed to get out of my airless apartment so  I thought I’d give it another try.

As I entered I passed a friend who lives in the same apartment building as I do. He was pouring over his own book so not wanting to interrupt his quiet reading or my own I kept going. I found my place on a bench further up the walk.

Later in the day, I ran into my friend coming off the elevator. “Hi, Frank,” I said.  “I saw you in the park today.”

“Oh, yes, I love reading in the park on a summer day. I do it almost every afternoon.”

“It went pretty well for me today too,” I told him. “Only one person interrupted to ask me for money. And no one tried to expose himself to me.”

“All the time. That’s why I stopped going to the park.”

“I guess these aren’t things that happen to you.”

This got me thinking.  I often give to people who are on the street wanting money.  I especially give to musicians, but I do also give to people with signs and cups. There’s a young schizophrenic woman who appears to live outside the bank.  She’s so lost that even asking for money is too hard; sometimes when I walk by her I’ll drop a five in her lap. I only mention this to point out that I’m not some hard-hearted soul who’s against helping out a fellow traveler. That’s not what this article is about.  It’s about people entering my world uninvited. That’s what I don’t like–being forced into an interaction I didn’t ask for.

After I spoke to my friend I realized that those who actively confront me for money, sometimes demand it, do not do so with men.  My friend had NEVER had this happen to him in the park, while for me it was a regular event. My choice of whether to interact or not was regularly taken away.

Being exposed to, thankfully, is less common, but it was regular enough to have made me give up going to the park. Look, I’m a city person.  I, of course, have learned ways of dealing with these situations.  One of those ways was to stop going to the park.  But why should I have to do this?

Then it hit me.  With all the liberation and equality spiels that are thrown around when you’re a woman, you are vulnerable to a host of interactions that men don’t even know exist.   For me simply going into a park to read was a bigger ordeal than it would ever be for Frank. He was completely empathic to my situation and I even heard some outrage in his voice, but he would never know the subliminal battle, the preparation to fend off unwanted interactions, that every woman fights each day when she simply leaves her home. Every day a woman enters a world that is far different from the one a man enters.  It is fraught with subtle interruptions, annoyances, anxieties, and the unspoken knowledge that things can get much worse than being accosted by a beggar or an exposer.

The world a person walks through is a different world depending on color of skin, sex, age… many things. How much we can understand about all those other worlds is a measure of our humanity. It’s a complicated business!

I’ve been trying to reply to you all week, but I’ve been in this hotel in Atlantic City that promised free wifi in the room, but alas, it did not work. Sorry this has taken so long.

I really appreciate your comment and yes we all do belong to different worlds and usually we belong in more than one world. I wanted to comment on the female world which would cross races and sexual orientations. Although I didn’t hit it hard, but was implying and probably with too much understatement, I did stop going to the park, only because of panhandlers, but also because of men who needed to expose themselves. This is most definitely a female thing. It’s unlikely to happen to anyone of the male gender. Of course, people of color have very special situations, troubles and triumphs that they deal with every day that never touches whites. And we need to talk about it and people of color need to make noise about it and let us whites know what’s going down for them. I think women also have to let men know what goes down for them. You and I both know there is no such thing as a woman who has never been sexually harrassed at least once in her life, but usually more. Good men who would never do this do not know that this does go on. Women could use these men’s support. Instead of their denial. Often when you tell men about this they tell you (and this has happened often to me) you’re being too sensitive, that didn’t really happen. Would they say that to people of color about their experience. Blacks walk in a dangerous world and so do women (and sometimes you can be both). I can empathize and be outraged by the experience of blacks, but I can’t write about it in a personal way. I can write personally about being a woman. My mistake may have been to just focus on panhandlers when they are the least of the problem. That was sort of meant tongue-in-cheek because there are so many worse things. You don’t work in academia. If you want to get a dose of misogyny that’s a good place to go. Forgive my soapbox. I have to get down now and get back to revising my novel. Thanks for giving me a chance at expressing this.