I Miss the Magic of a Broadway Musical – Vanda
2

I Miss the Magic of a Broadway Musical 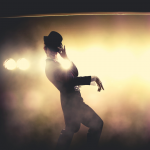 This week I’ve been writing about a fictional musical that two of my characters are rehearsing because they are going to be in a Broadway show. In order to feel my way into the scene, I needed something that would give me a sense of how this musical might sound.  I needed to listen to an old-fashioned soundtrack, something from the fifties or sixties. I wanted to hear those kinds of sounds and feel the excitement I once had for the theater before it was pounded out of me. (I spent more than twenty years as a playwright. If that doesn’t kill your love of theater nothing  will.) I needed to get back a little of the magic I once knew.

I thought about the soundtracks I’ve listened to and the musicals I’d actually seen and out of the muck and mire of everyday life came a memory of one particular Broadway musical: Carnival. Not Carousel, Carnival.  People often mixed up the two.  And yes, Carnival-like Carousel was made into a film, a pale comparison to the play.  I must have been eleven or twelve when I saw it.  I only saw it once and yet the impression it made on me was staggering. It was my first Broadway show.

My extracurricular music appreciation teacher brought the class to New York City to see it.  What a job that must have been.  Contacting parents, dealing with the money, arranging for group tickets, organizing parent volunteers, keeping track of us on the Long Island railroad and then the subway.  Just the thought of organizing a trip for thirty or so sixth graders makes my head hurt.  I remember we sat in the mezzanine or maybe it was the balcony (Remember balconies? We don’t seem to have them anymore. Now they’re called the Loge or the Rear Mezzanine)

I don’t remember the other kids and I don’t remember getting to the theater. I have no recollection of the train ride. However, what I do remember is sitting on a red cushioned seat breathless as the curtain slowly opened.  Yes, there was a real curtain.  There is nothing like waiting for a curtain to open to reveal the secret magic of another world behind it.  Sets were far less grand than they are today, but no less magical, and for me in my memory maybe they were more so. I remember the thrill of the overture, the costumes, the sound of the singers, the dancers.

Oh and the storyline.  It was about a woman who comes from a small town, Mira, to work in a carnival. She falls in love with the puppeteer, but he can only communicate through his puppets. Without them, he is mean to her.  Carrot Top the red-headed puppet is the kindest and smartest one.  He was my favorite.  I already had a history with puppets.  That was how I’d begun my writing career.  By writing puppet shows for my first-grade class. Carnival was perfect for me.

Flash forward to the present: As I sat thinking about Carnival I felt a great love not only for the theater but for the teacher who took the trouble to get us there to see it. And I had the thought: Why don’t I do that?.  Why don’t I take my own students to the theater? My students are not the type who would take themselves to the theater.  Just like that music appreciation teacher, I would be exposing my students to something very new. Despite being college students and living in the New York City area many have never been to a  Broadway show. I got momentarily excited. Yes, this could be a life-changing experience for them.

Then reality swooped down and hit me on the head.  My students don’t have money.  Neither did our parents. Many of us were working-class kids, but when the teacher talked to our parents and convinced them of the importance of this event out parents found a way to pay for such a trip.  But today? I’d be asking my students to make a major financial investment. Even discount prices would be more than they could imagine spending for something they would see as having little value in. I certainly couldn’t require them to attend, but if I made it optional I probably wouldn’t have enough students to get a group discount;  I could end up sitting in the theater with one enthusiastic student.

And you know,  with all the bells and whistles that are demanded now on Broadway and the high ticket prices, I hardly ever get that same excited thrill anymore. And I miss it.

I was expecting a happy ending, Broadway musical style. Dang! Don’t give up. What about getting your students involved in a gofundme campaign to see their first Broadway musical? Get some investment in the project. Find the show, determine the funding goal, use what you’ve written above for the plea, and slap up the campaign. So many people will want to send these students to their first show. (Hey, look at me! Almost forty years as a playwright and still not weary of theater!)

It’s an interesting idea and I’ll think about it, but it would be tough to do. I’m not the English teacher. I teach 5 classes of some aspect of counseling theory or skills and psychology. I would first need to figure out how this would fit putting together a crowd funding would fit the class. I’d have to figure out which one of my classes and I’d have to have time to supervise it. I wouldn’t set it up myself if we did such a thing. I’d have to make a learning event for the students, but I’m not sure how to apply it to the content I teach. I will give it some thought. Maybe I’ll come up with something. Thanks for your idea.