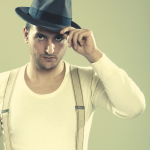 The late thirties/ early forties was a time of fedoras on men and hats, gloves, and girdles on women. That was before the Japanese bombed Pearl Harbor marking the United States’ entry into World War 2. Shortly thereafter, everything changed. Most men turned in their fedoras for servicemen’s hats (Men ages 18-65 had to register for the draft; men up to age 45 could be drafted) Women lost the girdles. Who needs a girdle when your stockings are painted on with specially made leg make-up and your girlfriend draws the seams on with an eyebrow pencil?

During World War 2, in an effort to save precious materials needed for the war, The War Production Board (WPB) was in charge of rationing civilian goods. The first to be rationed was sugar and gasoline. Gradually other items were added like rubber, coffee, and meat (somehow poultry didn’t count as meat so it wasn’t rationed). Alcohol wasn’t rationed because the misery of Prohibition was still fresh in everyone’s mind. As my character, Juliana, says, “Maybe if we all spend the war inebriated we won’t mind the shortages.”

You couldn’t buy a refrigerator or a Bendix washer (the first automatic, non-ringer type) during the war, but these companies regularly advertised in the popular magazines, reminding customers of all they were giving to the war effort.

When the Government Told Us What to Wear

One of the regulations The WPB came out with had to do with how much cloth could be used in making clothing. Although clothing wasn’t rationed in the US (except shoes*) as it was in Great Britain the WPB made regulations on how much cloth could be used to make any one outfit. The sleeves of dresses now had to be 3/4 length, dresses with no collars were favored. Double-breasted suits for both men and women became single-breasted. There were no more women’s pleated skirts. (Stanton, 2009a) The WPB’s slogan was, “Control without regimentation,” meaning they didn’t want to tell designers how to initiate their regulations, but they did expect them to be followed. After all, this was being done “for the boys.” Everyone was behind it. Muriel Johnstone, a dress designer, advertising her new regulation dresses used the slogan: “Conserving material for victory.” (Old magazines.com)

In the interest of following the mandate to use less material—or so they claimed—designers started raising women’s hemlines from mid-calf to just below the knee. The amount of clothes women wore during this time became less and less, especially in Hollywood. Watch the films made during the war. First, you’ll see a lot of those collarless dresses along with the shorter lengths. Also, you’ll note how scantily many of the women are dressed, lots of bare legs, bare arms, cleavage. Compare these outfits with the clothing worn in films made before the war and after. It was “all for the boys” to win the war. (Stanton, 2009b)

Alice, my main character in Juliana says, “I came home with a pair of pants.  I’d never had slacks before. No one wore them, except to do the gardening or maybe at the beach…. The Brown Derby in Hollywood refused to serve Marlene Dietrich when she showed up for lunch in pants.  Katherine Hepburn wore trousers all the time, but she was always getting kicked out of hotel lobbies.  One time the producer of one of her films took her pants out of her dressing room and left a skirt.  She walked across the movie lot in her underpants.”

Wearing pants in public before the war carried some pretty heavy social consequences when you were a celebrity, but the social restraints were even worse if you weren’t.  And then when once war was declared… Well, everyone’s heard of Rosie the Riveter.

However, in 1940 a New York City ordinance made it illegal for female impersonators (drag queens) to entertain wearing women’s clothes. The prohibition against cross-dressing in public had been forbidden for both genders for some time.  Therefore, women suddenly wearing pants to work must have been awfully confusing for the police. The ordinance allowed a cop to stop anyone dressed in a way that was considered appropriate to the opposite gender and ask them to show that they were wearing three (some authorities say five) items of clothing from their own gender.  If they couldn’t do this then the cop could arrest them. But the laws had to become looser during the war to accommodate the army of new women factory workers. (I have found no authority to comment on this)  This offered an opportunity for butch lesbians to be freer in their clothing choices.  After the war society was even more vigilant than previously about cross-dressing.  During the post-war era, you rarely saw a woman wearing pants in public.  For example, watch I Love Lucy closely.  Sometimes Lucy or Ethel (mostly Ethel) wear pants in the house, but always, before going out they change their clothes.  This return to a rigid dress code, more rigid than before the war, put butch lesbians in quite a spot.  When they were out walking with a group of lesbians who could pass, butches in their men’s clothes would have to cross to the other side of the street when non-gays (or jams) approached so that the passing gay girls were not recognized.

Still, even during the war when women could wear pants in public they couldn’t wear just any pants.  Women’s pants always had zippers on the side.  This lasted through the early sixties. Wearing pants with the zipper in the front would have been seen as scandalous. The same was true for dresses. The zipper was on the side.   Zippers in the front on trousers would have made women look shockingly mannish. And this was a society that worried about such things. Zippers in the back of dresses would go against womanly modesty by making a woman too accessible.  To see a side zipper in use on a dress watch the film, Gilda (1946), with Rita Hayworth and Glenn Ford.  Gilda finishes singing, Put the Blame on Mama, Boys in a nightclub in which she has removed her opera gloves and a necklace. She challenges someone to come on stage to help her unzip her dress.  Two dorky guys jump out of the audience to volunteer. They go for her zipper on the side.   (Sorry, guys or ladies according to your particular orientation, they don’t get far before the bouncer stops them and Glenn Ford punches Gilda in the face)

The Just Below the Knee Club

When the war ended you might expect that after years of less material this next generation of fashion would be even more liberated. Not so.  Dior in Paris came out with the New Look, which meant longer skirt lengths with a flare, girdles, and longline bras. He even added hip padding to make the waste took tiny.  This style ruled the 1950s and influenced ready-to-wear.  It was a reaction against the mannish, boxy styles of the war.

BUT not all women were so eager to embrace this New Look.  Groups of women around the country formed “Little below the knee” clubs to protest being put back into restrictive fashions.  When Christian Dior came to New York, the Manhattan branch of the “Little below the knee club” marched down Fifth Avenue in protest against him. (Hawthorne, 1996) Alas, the New Look won out and the  “little below the knee clubs” folded.  Women were once again encased in yards of satin, crinoline, and corset-like undergarments.  They would have to wait for the sixties to get out of all that material.

*Each individual was allowed 3 pairs of shoes a year, which doesn’t sound terribly harsh to me. Stage Door Canteen volunteers were permitted an extra pair of shoes because their shoes wore out quickly from all that dancing.

(For info about LGBT history in the thirties, forties, fifties, and for specific NYC history go to www.julianathenovel.com)