A Little Known Fact About the Stage Door Canteen – Vanda
0

A Little Known Fact About the Stage Door Canteen 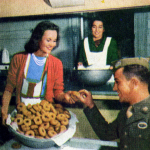 An Important Little Known Fact About the Stage Door Canteen

You’ve probably seen the film, The Stage Door Canteen, with lots of singing and dancing and movie stars serving sandwiches to the soldiers and sailors who come there for a night of fun and dancing with the volunteer hostesses before they take off for the war.  The film’s story focuses on four soldiers who are in New York City for the very first time.  They come to the Canteen and fall in love.  It is all very innocently romantic.  But there was much more to the Canteen than most people know.

The American Theater Wing headed by Rachel Crothers and Antoinette Perry established the Stage Door Canteen in New York. It was one of the many programs established by the American Theater Wing during the war. Miss Jane Cowl and Miss Selena Royle put their own successful acting careers on hold in order to keep the New  York Canteen running seven nights a week. (Get a load of all those unsung women!)

The Only Integrated Club in Times Square

The Stage Door Canteen was the only completely integrated club in the area. During the forties in Times Square African Americans could be and often were denied entry into movie theaters and nightclubs. (This was a time when seeing a black bus driver, elevator operator, doorman or policeman was very unusual) Some movie theaters would admit people of color, but only allow them to sit in the back. The Stage Door Canteen was a vitally important ground breaker.

Hostesses were required to dance with soldiers of all races and if they could not do this they were dismissed.

The only other club that allowed people of color to be equal customers (and not just entertainers) was Café Society, Downtown, located at Sheridan Square in the West Village.