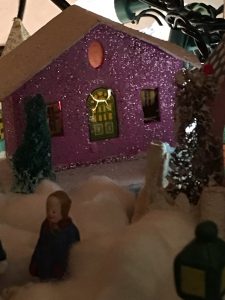 When I was a child my mother had these little cardboard houses with glitter all over them.  There was a hole in the back to put a light.  She also had little metal figures to go with the houses.  With them she made a Christmas Village under the tree.  As I grew older the houses and figures were relegated to storage.  Until one day my kid sister and I found them again. We made our own Christmas Village in between our two rooms.  I think we did it a few more Christmases after that.  I remember how much I loved looking at our little town all lit up.  It looked like such a wonderful place to live.  But, as with all children, my sister and I grew up and lost track of the little Christmas Village houses and people.  My parents moved and who knows where these things ended up.

Lately, I found myself longing for them (probably my novel was doing that to me) so I did a little research and I found out the Christmas Village houses and the metal people were a tradition throughout the 1930’s, 40’s and 50’s. They were sold in five and dime stores and in catalogues like Sears & Roebucks.  The “best” I read came from the 1930’s, during the depression.  Although people could not afford much during that time, they could afford a “putz house” for under the tree.  I wonder if the ones my sister and I played with were from the 1930s when my mother was a girl.  Fascinated by the history of these little houses I headed for ebay where I found plenty for bidding and for sale.  I figured if I couldn’t have the Village from my mother I could begin my own.  So that’s what I did. They make me feel closer to the characters in my novel.

These houses were originally made in Japan so, of course, the importing of them stopped during the war.  One story I read was about Ted Althof, a well-known collector, who met an older woman who had worked at a five and dime when Pearl Harbor was bombed.  The day after the bombing her boss told her to collect anything made in Japan and put it on the curb to be taken away. American toy companies began producing them (Martin, 2010).

These houses are amazingly simplistic in their construction–we would never accept them today–but this simplicity seems to add to their charm. Despite being simplistic they are delicately made.  They have little cellophane windows which a breath could  tear.  It’s incredible how many houses have their cellophane windows still in tack.  It makes me a little nervous.  They’ve survived 60 and more years before they got to my tree. What if they can’t survive me?  Such responsibility! 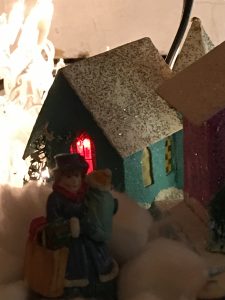 What do these houses and metal figures have to do with the lives of LGBT folks (the subject of my novel) living secretly in New York City in the 1940’s?  Well, one of my missions with this novel is to show that LGBT people have been living everywhere through every time and they’ve been celebrating the same traditions that everyone else celebrates, including putting little glitter houses under their Christmas trees.  They have never been alien beings despite having a long history of being treated that way.

Today there is gobs of information on the net about this tradition (its origin and history) and there are collectors who talk to each other in chat rooms and discussion forums.  I don’t think I’ll ever go that far, but there is something very comforting about waking up in the morning and looking down on the quiet little village under my tree and imagining what life might be like in a place like that.

Good clean prose, Vanda. As clean and simple as the little Christmas houses that you describe. Keep it that way!

People often forget we are all human, no matter what we practice, who we are or where we come from…we all are the same at the base.