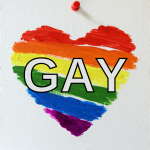 As a result of doing research into LGBT history for my novel, I became fascinated by how the meanings of “in” words change. In the 1940s gays lived in a secret world. No one was in the closet because such a concept didn’t exist. Homosexuals were considered either criminal or mentally disturbed so you were not likely to go around advertising. It was a time when it was illegal to serve liquor to immoral persons and homosexuals were high on the “do not serve” list. But in their secret world, a culture was growing and as with every culture it had its own words to refer to itself and to those who inhabited the out-group beyond them.

It is often assumed that the word “gay” to refer to homosexuals came into use in the 1960s after Stonewall. But it is important to remember that “gays” had been living secret lives for decades before this. Stonewall only made straights aware of a word that had already been in use. I remember hearing straights in the seventies bemoaning the ruination of the word “gay” because of its “new” meaning. In reality, if a word can ever truly be termed “ruined”(meanings of all words are constantly changing; it is the nature of language) it was “ruined” long before the late 1960s.

The word “gay” meaning homosexual has been in use since the 1920s. Some authorities say one of its early meanings was “loose woman” or “prostitute” and then it gradually came to mean homosexual; other authorities claim that the use of the word gay to mean homosexual began long before the 1920s. Word derivations are hard to track, but we do know that the word gay, meaning homosexual was in use before the 1940s. In Bringing up Baby, a 1938 movie with Cary Grant and Katherine Hepburn, Grant wears a frilly woman’s bathrobe and jumps up and down proclaiming, “I just went gay all of a sudden.”

Remarkably, this got past the censors and the straight audiences.  It was against the Hayes Code to include any reference to sexual perversion (homosexuality) in films. The censors and most of those in the audience (but certainly not all) had to interpret “gay” as meaning happy.

Although the word ‘gay’ was in use by gays in the 1940s and hidden from the outer world, the word lesbian was not generally used by gays. The word “lesbian” was considered a street word and derogatory. It was only used by the outer world and was intended to be insulting or “clinical.” “Lesbian” did not become a positive term until the 1970s when gay women claimed the word for themselves and reclaimed its original meaning in relation to Sappho, the Greek Female poet, who lived on the Island of Lesbos. During the forties, fifties, and sixties gay women referred to themselves as “gay girls.”

Gays in the 1940 and 50s also had their own special names for non-gays.  They called them “jams,”  “straights,” (in use since 1941), and “normals” The word “normal” seems to have been used prior to the 1940s and probably lasted well into the late forties and beyond. Gore Vidal in The City and The Pillar, argumentatively the first novel about male homosexuals, published in the U.S. in 1948, used the word “normals” throughout his book to refer to straights.  This may give some indication of the degree of internalized homophobia that understandably existed during that time.

Medical Terms In Use in the 1940s (and before and after)

Medical men who were trying to be objective about the “disease” of homosexuality used the following terms:
Invert (men and women)
Third Sex (men and women)
Lesbian (women)
Tribadist (women)

Thank you, good history and explanation. Where does the term “queer” stand now?

Glad you asked about queer. I should have included it. I’m sure you remember when calling someone queer was very insulting. Now queer simply means a person who does not fit neatly into the gender binary. They might prefer the pronoun they, but not be transgendered. There’s all sort of other possibilities. Thank you so much for your comment. Vanda