Andrea Alton at This Year’s Fringe 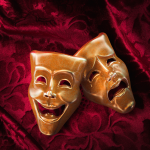 Today I am excited to have Andrea Alton with me on www.vandawrites.com. Andrea’s play, A Microwaved Burrito Filled with E-coli, written with Allen Warnok, opens at The 20th Annual New York International Fringe Festival on August 16. I’m always impressed with Andrea’s inventive titles.

Andrea recently won the Doric Wilson Independent Playwright Award at the New York Innovative Theatre Awards. As an actor/writer, her notable productions include, Big Girl, Little World, Carl & Shelly: Best Friends Forever, which she co-wrote with Allen Warnock, The F*cking World According To Molly, and last year’s production of Possum Creek. I loved the creative absurdity of Possum Creek.  There was something real about it, but also it was nuts.

Andrea is also the creator of Molly “Equality” Dykeman and has performed the character to sold-out houses at The Laurie Beechman Theatre and internationally. Andrea’s plays have been produced throughout the country with notable productions in New York, Washington DC, Florida, and Ireland. Andrea just returned from The Dublin International Gay Theatre Festival where she performed in Kathleen Warnock’s play, Julie Andrews Is The Devil.

Vanda: I recently heard that your play has been chosen as one of the top ten shows in the Fringe and that it will be published. Can you tell us a little about that?

Andrea: Well I don’t know how they pick the top 10 shows but I’m usually the underdog so I’ll take it. Martin Denton’s site Indie Theatre Now is publishing A Microwaved Burrito Filled With E. coli. Allen and I are very excited and thankful we were selected.

Andrea: I enjoyed writing as a teenager. Most of the stuff I wrote was a little quirky – not much has changed. I started writing plays in the late 90’s after I moved to New York. I had always loved writing but it wasn’t until I came to New York that I realized I could be a playwright.

Vanda: Do you still call yourself Molly Dykeman. Can you tell us a little about that?

Andrea: Yes. I love my character Molly “Equality” Dykeman and I’m so happy when I get to perform her or write for the character. The character came out of a sketch in 2005. She’s evolved a lot since then but she’s still the same old Molly. She loves her mullet, nachos. and the ladies.

Vanda:  What was the impetus for writing this new play that will be in the Fringe?

Andrea: Allen Warnock, my writing partner, and I had wanted to work on something together for awhile. I love writing with him and every time I share the stage with Allen I get a little giddy. It’s pure joy. We have two funny, quirky characters that we wanted to put together. We started talking and then everything started to unfold.

Vanda: You’re also a PR Representative. Can you tell us something about that?

Andrea: I love doing press for Indie Theatre. I’ve been doing pr for 5 years and I still get excited when review requests come in or a client is going to be featured in an article. Working in theatre is hard, it takes a lot of time, energy and money to get productions off the ground. If I do my job right, hopefully the production will get some recognition in the press and they’ll reach a wider audience.

Andrea: When the Fringe is done, I’m going to spend a few days sleeping in and binging on Netflix.

After that, I have several plays I want to finish and a web series. But the thing I’m most excited about is going back to Oregon for a week. My parent’s 50th Anniversary party is in September so I’m looking forward to breathing fresh air and being around my crazy family.

Vanda: If you could cast any actor in the world in one of your plays who would it be and why?

I don’t want to pick just one. How about Mark Rylance, Helen Mirren, and Kevin Hart to make it interesting. And oh… Allen Warnock. He’s the funniest actor I know and wait, he’s in the Fringe show!

Be sure to see: A Microwaved Burrito Filled with E-coli (Running time 55 minutes)
Tickets: $18
Available at www.fringenyc.org/basic_page.php?ltr=M#AMicro