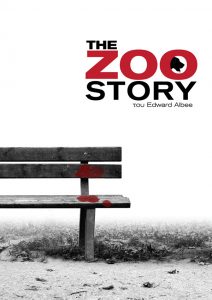 The first time I became aware of Edward Albee I was a new freshman in college; it was during Freshman orientation. I had only arrived at Shepherd College, Shepherdstown, West Virginia that morning. How I got from Huntington Station, Long Island to West Virginia is its own story and there’s no need to tell it here.  I remember it being a cool August evening before the sunset. I was exhausted from all the orientation activities they had put us through. Many of my fellow classmates didn’t bother to trek down to the edge of the campus to Reynolds Hall where they had a small theater. But I was at college! Me! I’d made it to an actual college! I was going to be part of as many intellectual activities as I could. I sat close to the front on a red cushioned theater seat, a little rickety. The theater was not very full. The program announced that the cast was composed of students from the college. I waited.

The curtain was pulled open—yes, there was an actual curtain and behind it two young men who I would shortly come to know as my classmates. One sat on a bench, Peter, the other, Jerry, paced behind him. “I’ve been to the zoo,” Jerry, said to Peter. And so began Zoo Story, the play that changed my life. I had never before seen a play like that. It grabbed me by the throat in a way that only the best of theater can do. I instantly connected to it. In some unconscious way it was telling the story of my life. It would influence my thoughts and my own writing for many years to come. I suspect, Edward, and most of the other male playwrights of that time had no idea that this powerful play could define a young woman’s early experience too.

Flash forward about thirty years. I was a playwright myself, a playwright who had been accepted as an Edward Albee Fellow. I won a place at the William Flanagan Memorial Creative Persons Center. But we all called it “The Barn”. It was in Montauk, NY and I was in residence for the whole month of September. There were five of us who’d been chosen to share the Barn that month: two visual artists and three playwrights. I was the only woman. All we had to do for the whole month was our work. That’s a little like going to heaven.

One of my favorite memories from that time was Edward driving in from town and delivering our mail-in his Bermuda shorts. Another memory, not so good:  Edward loved animals so as long as we cleared it with our fellow housemates we could bring our pets. I brought my neurotic cat whom I loved to pieces. She bit Edward. She had no appreciation for networking. Another favorite memory was a few days before it was over, sitting around the picnic table with Edward for our barbecue. Edward’s partner, Jonathan, sat with us quietly. I’m sure he wasn’t feeling well—he’d struggled with cancer for a long time—but he managed to smile at Edward’s stories. Edward still held resentment toward his biological mother who had given him up at birth; he had been raised by adoptive parents. (Three Tall Women was based on his adoptive mother) How hard it is for all of us to get over those primary hurts. At least writers get to turn theirs into art. He gossiped a little about some of the playwrights we all know, telling us about the problems he saw in their work. I won’t say here who they were. He also told us about a play he was working on that dealt with twins. He had suddenly become fascinated by the idea of twins he told us. This play became Me, Myself and I, and was produced off-Broadway a few years later.

When the barbecue was over I went inside the house to help with the dishes. Wasn’t that what I was supposed to do even though I was bad at it? Edward and some of the men were outside talking. I’m naturally reticent about talking to people, especially those I don’t know, but as I stood there wiping that dish I thought, “Vanda, this is your chance. Your chance to actually thank this great writer for his work. When will you ever get another chance like this? I put down the dish and ran outside into the dark that was only lit by the last embers of the barbecue and someone’s cigarette. I looked Edward right in his face–I’m sure I interrupted a conversation, but at that moment the rules no longer applied. I said everything that was in my heart at that moment. I have no idea what I said. No memory of my words at all. What I do remember is Edward looking at me and listening to every word. When I stopped he nodded and I went back into the house. Did he think I was out of my mind? I don’t know. Maybe. But I don’t think so. For that brief second, there was some real connection between us, maybe the same connection as when I first saw Zoo Story. I may have made a fool of myself that night, but contrary to what usually happens, I never once regretted that moment or telling him whatever it was I told him.