THEY: A Biblical Tale of Secret Genders – Vanda
0

THEY: A Biblical Tale of Secret Genders

Reviewed by: Vanda, author of the Juliana Series

All the Bible stories from your childhood suddenly jump to life in Janet Mason’s new novel. They. The manner in which they are presented I found to be a lot of fun.

The story is about a woman named Tamar who lives in ancient times, around the same time as Joseph who had the cool colorful coat. Tamar and her family live in tents; she is obsessed by her camel, Aziza, who she keeps reminding everyone is not a camel, but a dromedary because she only has one hump. Her friends and family don’t seem to care a fig about the difference, but it is very important to Tamar.  She and her dromedary have a special relationship as important to her as her relationships with her friends.  Aziz is so important to Tamar that she has her sleep inside, an action that will later bring her problems.

I, especially, enjoyed discovering Biblical characters though their stories and name.  I was part of the discovery.  I’m watching people from a different time period living their lives and suddenly I realize their talking about someone I know.

As a young teenager I was in search for answers. so I read the Bible cover to cover looking for those answers.  I don’t know that I found any answers, but I enjoyed the stories.  The way the stories are told do not sound Biblical, they sound human.

The main character, Tamar, takes us through the whole book. She even dies and lives in the book as a spirt.  Then she ends up in a womb until she is born again into a new life

Gender is flexible in these Biblical stories.  Although the people are as hung up about gender as we are—I guess we probably got this way because of them. The different genders appears. Tamar in her first life has an lesbian experience that she wanted to continue, but the other woman couldn’t accept Tamar’s favorite camels sleeping in the same hut.  There were also intersex twins who lived their lives as males because this was the preferred sex. 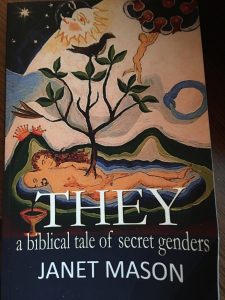