Review: The Life-Changing Magic of Tidying Up: The Japanese Art of Decluttering by Marie Kondo. – Vanda
2

Review: The Life-Changing Magic of Tidying Up: The Japanese Art of Decluttering by Marie Kondo.

The Life-Changing Magic of Tidying Up is an absolute gas! I can’t find any other way to say it, but to use that old fifties slang word, for a very new book. I never knew cleaning up your crap could be this much fun. 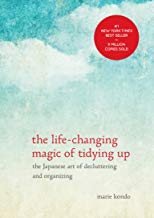 I’m not sure why I picked it up to read? I had lots of vital reading/research to get done for my own book. I certainly didn’t have time for someone else’s. But that title: ‘Life changing?’ Tidying up could be life changing? Oh, come on. It drew me in. I needed to know what this woman had in mind. On top of that, there was that word: “Tidying.” Who says that? Say the word out loud. Doesn’t it feel strangely wonderful in your mouth. These must have been the things that got me to purchase the book. But could what was inside keep me going?

Well, I’m here writing this review, so you know the answer to that. There was much to keep me going and I found myself totally excited about the potential of ‘tidying’ up my apartment by the KonMari Method. There was really only one spot in my place that visibly looked messy and then, of course, there was the closet. But, I didn’t think this would be all that much of a job; I was eager to go on a spiritual journey by tidying up. I was ready to have my life changed through the KonMari Method.

This book is about much more than just “tidying up.” Let me share how to store your socks according to the KonMari Method. Kondo tells a story about an interaction she had with a client. (Professionally, she consults with individuals and groups about tidying up) She opened the woman’s sock drawer and “gasped. It was full of potato-like lumps that rolled about.” I found Kondos’ reaction hysterical; she certainly takes her work seriously. In bold, she says, “Never, ever tie up your stockings. Never ever ball up your socks.” This sounded like good advice even though I was guilty of this shocking behavior. I thought it made sense because you could stretch out the tops of your socks. But this was NOT Kondo’s reasoning:

“Look at them carefully,” she says. “This should be a time for them (the socks) to rest. Do you really think they can get any rest like that?” I discovered I had been torturing
my socks and knew I couldn’t ever ball them up again. The guilt would be too
great. I switched to the KonMari Method for storing socks. Wonderfully explained in the book.

Some Tenants of The KonMari Method
1. Do it all in one day (This prevents rebound)
2. Take out all your things—and she means everything—and put them on the floor.
3. Don’t even consider putting anything away. Discard first. (“Keep only those things that speak to your heart and discard the rest)
4. Fold, hang and store by category, not location. (Sorting by location is a “fatal” mistake)5. The special order for tidying that you must follow is this:
a. Clothes
b. Books
c. Papers
d. Miscellany (Kondo calls this komono)
e. Mementos

How to Decide What to Discard

Now, here’s my favorite part of the book. Throughout she tells you things like
you have to pick up every single item in your space one by one, hold it in your hand and ask yourself if it gives you joy. The question is NOT whether it gave you joy at some past time; the question is ‘Does it give you joy NOW.” If not, it goes in the Discard pile, but FIRST, you must thank it for giving you joy in the past. When I was only thinking about doing this tidying project, I found this humorous, later I thought of it as kind of cute and now I love the whole idea of it. Kondo thanks objects all day long and I’ve begun to see what a terrific idea that is. You begin to live in a world in which everything is alive and you’re always grateful.

There are lots more goodies in the book. These were the things that endeared me and made me decide to go on my own spiritual journey. I chose a day (Kondo says the day you choose to tidy up should be especially chosen. Make it an event) I decided that I would not just clean up that one messy area and the closet. I would, instead, use the KonMari Method to tidy up everything: my closets, my drawers, my desk, my medicine cabinet, the whole place.

The Results of My Own Tidying Up Spiritual Journey

I started at seven in the morning and ended at ten at night when I could barely move. I was attempting to follow Kondo’s rule to do it all in one day to prevent rebound.

I got a lot done in that day, but I did not finish. I was slowed down by deciding whether items of my clothes gave me joy or not. The only way I could tell was by putting them on. How I looked in the clothes was what generated the joy, not the simple fabric by itself.

I probably saved some time on the books, however. A few weeks before I read Kondo’s book, I had organized my bookshelves and turned them into a kind of library giving each book its own place and recording the location on my laptop. As a researcher I often have to go back and read a section of a book. I am frequently frustrated by not being able to find a book among the many I have on my shelves. Sometimes, I’ve bought the same book a second or third time. It turned out that my organizational system wasn’t too different from Kondo’s, except there was one giant difference. She says you should throw out books you’ve already read because you’ll never re-read them. As a researcher I may not read a book cover to cover, but I’ll go back to the same section or sections often.

Kondo has a unique way of storing clothes. She recommends folding some blouses in a specific way, instead of hanging them on a hanger. This type of folding allows you you to stand your blouses up in the drawer. I tried it and I liked it. I also liked the extra space I had in my closet.

But as I said before, I didn’t finish in one day and I only have a studio apartment. I think someone with two or three rooms would have a worse time getting done in one day. Kondo doesn’t mention the bathroom, the kitchen, or the bedroom which I consider part of my tidying up.

Overall, though, I learned a lot from Kondo’s book, and I think I’m going to continue using her approach in the future. Instead of risking rebound by doing the tidying I have left in short bursts over a number of days I have planned a second event for next week in which I will complete my spiritual journey.

Kondo says, “Tidying is a dialogue with one’s self…There is a significant similarity between meditation under a waterfall cascading down your body and tidying.
Personally, I’d rather have the waterfall, but I do love Marie Kondo’s approach
to tidying up and life.”

It’s genuinely very complex in this active life to listen news on TV,
so I just use the web for that reason, and obtain the most recent information.

Very great post. I simply stumbled upon your weblog and wished to say that I have really loved surfing around your weblog posts.
After all I will be subscribing to your rss feed and I hope
you write once more soon!