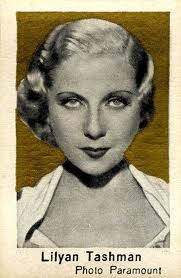 Let me set the scene:

A slender blond enters the powder room of an exclusive club.  She waits.  What is she waiting for?  An attractive woman to enter.  She has a mission.  She must seduce almost every woman she meets because she’s convinced that all women would, of course, choose sex with a skilled woman lover over sex with an awkward, selfish man.  Lilyan was known for  her powder room antics.  She would seduce theatrical grande dames and teenaged ingenues.  Many drunken women ended up enjoying Lilyan’s talents and never returning to men. Of course, there were some who were not so enamored of Lilyan’s special gifts.  Irene Mayer Selzick, socialite, producer and daughter to Louis B. Mayer,  said Lilyan’s bathroom antics were  “so overt. I’d never seen anything like it–couldn’t believe it was happening.” Lilyan was very persistent saying, “Everyone does it.  Nobody talks about it.  We won’t tell anyone.  It’s fun, you’ll love it, you’ll see.  You’re so lovely…”

This was in the twenties and early thirties, a much looser time.  This was the time of Prohibition, which made drinking alcohol illegal.  Long-time restaurants had to close. No one would come if no alcohol could be served.  The Mob solved that problem: The Speakeasy. And the US entered one of the wildest time periods of its history. (That all changed in the late 1930s when Prohibition was repealed and drinking became legal once again.

Since celebrities make cameo appearances in my novels I had wanted to include Lilyan Tashman in my Juliana Series Book 1, but she died too soon (1934) before Book I even begins.  Lilyan Tashman began as a vaudevillian in New York and appeared in the Ziegfeld Follies between 1916 and 1918. From this she became a Broadway actress and later a Hollywood film actress who some sources say never quite made it to what would be considered “superstar status.” Despite this she made sixty-six films and made an easy transition from silent films to the talkies.

The idea that Lilyan never reached star status may have more to do with an internet rumor made real through repetition than to fact. True, she is not a household name today, but are we the deciders of what was important to people in another era? Mann (2001) reports that The Lilyan Tashman Fan Club of the 1930s was composed of thousands of devoted young women. Reporters for movie magazines considered her “great copy” because during the depression she gave young women fashion advice. (Imagine a Lesbian giving fashion advise? Oh, our modern day stereotypes!) “If you have to, go without an extra hat, an extra pair of gloves or even an extra dress, do pay more attention to yourself. It’s the secret of poise and the very first step in smartness.” Mann goes on to say, “Tashman played her looks and femininity for all they could get her–“a lipstick” lesbian years before the term was coined.

Lilyan lived a lavish life with her openly gay husband, Edmund Lowe who had been her friend for years. He was a well-known actor.  Together they held weekly parties that everyone in Hollywood wanted to go to.  She insisted that the servants serve afternoon tea to her cats.

Maybe Lilyan didn’t reach the top of the Hollywood star list, but she definitely had her fans. When she died an early death at age 37 from stomach cancer on March 21,1934 10,000 of her fans, mostly women, showed up in a frenzy of adoration. They tore up the grounds trying to get close to her. They pushed the famous out of their way. Stars like Fanny Brice, Jack Benny and Mary Pickford. Their devotion sounded rather Dionysian. Eddie Cantor who gave the eulogy said, it was “The most disgraceful thing I’ve ever seen.” Several women almost fell into the open grave. There were quite a few injuries that day (Starr, 2006). Lilyan’s husband Edmund said about the women’s behavior, “People have said it was bad taste, irreverent. I don’t think so. Lilyan wouldn’t think so either. It was their way of showing they cared.” (Mann, 2001)

LILYAN: Lesbian, Bi or Straight and Does It Really Matter?

Given the way I opened this piece there would seem to be little doubt about Lilyan’s sexual orientation, but as is usually true with queer dead people from the past, everyone comes out of the woods to prove they weren’t really what we all know they were.

The Lesbian camp
Some sources consider Lilyan a Lesbian (Mann, 2001, McClellan, 2000, Wikipedia, 12/22/13). These sources focus on the fact that her second husband was an openly gay man and that she had an affair with both Garbo and Joan Crawford. McClellan says, “To call Lilyan a lesbian is like calling Casanova a flirt. Lilyan was a whole-hearted and highly skilled missionary for the joy of lesbian sex.” The sources in the lesbian camp tell of Lilyan seducing women in ladies rooms. You would think that this activity would have gotten her into a lot of trouble, but she had quite a few takers, as stated above.  That also probably explains the frenzy of women fans at her funeral.

The Bi-Sexual Camp
The most thorough source on Lilyan that I found on the net was a blog called: Silence is Platinum. In this blog, Lilyan is referred to as bi-sexual. The main reason given is that Lilyan was married to Edmund Lowe. But Hollywood gay and lesbian “stars” often married each other. It gave them a higher status than if they appeared at a party with only a “date.” According to my reading these marriages were not simply “show marriages.” These couples often developed deep friendships; they held communal property and each partner was given rights of survivorship.
The author of Silence is Platinum blog admires Lilyan for a number of reasons, but s/he is especially fond of Lilyan because she beat up an actress who she found in her openly gay husband’s dressing room. The implication being that Lilyan held sexual feelings for Edmund that perhaps went beyond friendship. Lilyan was also known in secret circles to have been this jealous and this volatile about her girlfriends. Garbo, supposedly, broke up with her because of Lilyan’s jealous tantrums. Mann (2001) puts a different spin on Lilyan beating up the actress in Edmund’s dressing room. Mann thinks perhaps the woman had come for Lilyan, changed her mind and some type of altercation ensued. He backs up his hypothesis with some plausible data. Neither woman appeared for the hearing so the charges were dropped. (Mann, 2001)

The Straight Camp
Curiously enough a short biography of Lilyan that appeared in The Windy City Times, a gay periodical that comes out of Chicago, seems to imply that she was straight. This article is the only one I’ve found thus far to talk of Lilyan falling “madly in love with Edmund” (Starr, 2006) without mentioning that Edmund was gay. This really had me perplexed. I mean the paper is gay! So, I looked a little further. The article was a syndicated column and The Windy City Times must have bought it without reading or thinking about it. Leaving out a celebrity’s sexual orientation is not uncommon. This has been the norm for straight press and biographies up until recently. Everyone is just assumed to be straight. This started me thinking. Does it matter if the sexual orientation is left out of the discussion of a celebrity? Celebrity not only includes the movie star types, but what about scientists, authors, artists and others? Is sexual orientation superfluous to an individual’s societal contribution or intricate? What do you think? I’d love to hear your opinions.  I hope you’ll leave a comment below.

Clip from one of Lilyan Tashman’s films, Pre-code days.

Awesome! Its genuinely amazing paragraph, I have got much clear idea concerning from this piece of
writing.