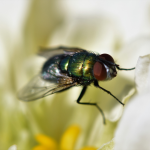 A few nights ago I turned off the lights, exhausted, and crawled into bed. I was lolling slowly toward sleep when I heard, “Bzz bzz.” I sat up.  “Where is it?”

I hate that sound.  I listened and looked. I didn’t hear anything. I didn’t see anything.  But now I was awake. I didn’t want to be awake. I got up and went to the kitchen for a glass of water.  I was leaning on the sink when “Bzz Bzz.”

That darn sound was following me. Where are you? I heard it, but I couldn’t see it.  Oh, man, how I hate that sound, especially in the dark. It’s creepy. Like something out of a horror movie. I never watch horror movies. I drank down the last of the water.  I couldn’t hear the sound.  Yes, that thing was gone. I turned off the kitchen light and got back into my bed.

“Bzz.” No!  I punched my pillow since there was little chance I’d ever slam him into the wall. “Bzz “Bzz”.  I threw the covers off.

“Where are you?”  I pulled the blanket up to my shoulders. I didn’t want that creepy thing landing on me.

“Bzz Bzz”.  I pulled the blanket over my head.

Still, that sound reached me.  Exhausted with trying to sleep I threw off the blanket, turned on the light, and sat up.  The fly was sitting right next to my bed on the bookcase, not more than six or seven inches from my nose. The arrogance!

I watched him sitting there using his little feet to clean himself or eat something or whatever they do with those front things.  I’m not up on fly anatomy.  I kept watching him and noticed something I’d never seen before.  He was beautiful.  I thought briefly of the disgusting places where flies like to hang out.

And yet—he was beautiful. He was larger than the average fly—not that I’ve made any kind of study of it, but he had this iridescent red, purple and green color on his back.  I stayed there watching him working those little feelers.  He wasn’t making a sound.

I told him, “You are so beautiful. I never realized before how beautiful a fly could be.  I was completely enamored by his beauty.

Finally, I said,  You are beautiful, but it’s that sound I hate. I mean I really hate it. I said goodnight to him, turned out the light, and snuggled into my bed.  There wasn’t enough light in my room to watch him as he flew off my bookshelf and passed me.  There was only a slight bzz as he went by, then it stopped.

There was no more bzz bzz for the rest of the night and I haven’t seen or heard from him since.

They are beautiful, yes, but it’s really hard to get past all of the places they like to hang out to see that. It’s proves the adage, ‘Beauty is only skin deep.’ Glad he flew away and left you alone!

Thanks, Anne. Great to hear your thoughts. Vanda

Vanda, I always talk to all the sentient beings. When I hear a fly I show it the way to the door and they always go out. Mosquitos too. Mice and rats not so much, but I always warn them if I’m going to have to do anything rash. When we moved down here, there were rats under the mobile home. First I sealed up all the places where they were getting in and out. All but one. Then I told them I was going to set a trap and I’d prefer they just leave, and talked to them through the place I’d left for them. A couple days later, I set a trap and sealed the exit. They were all gone and no one got killed.

I just got the ability to get back onto my own website. Oh, dear the horrors of tech and the men behind the cement walls who control them. So opposite to what I said in Bzz and so opposite in your beautiful comment.
I forgot to mention in the writing that the window wasn’t open. I keep meaning to make that revision. Thanks for commenting. Vanda