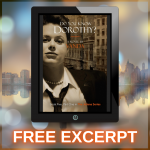 I put the briefcase on his desk. “Open it.”

He pulled open the top of the briefcase, looked inside, “Oh, my god!” and slammed the cover shut.  “Where did you get this?”

“A gentleman who I had never met before paid me a little visit last night. He was delivering this ‘gift’ for The Haven show. Complements of his ‘friend.’”

“Yes. I think it’s Wilferini. The guy mentioned this ‘friend’ wanted his son to run The Haven, so who else?  Also, Wilferini has shown up a few times in The Haven’s neighborhood. Never says anything much. I think he was trying to intimidate me.”

“I didn’t think there was anything you could do about and I didn’t want you getting’ hurt by trying to defend my honor. What do I do with it?”

Max sunk down into his desk chair. “How much is it?”

“Wow. You know how much this would mean to our two clubs?”

“They’d eventually own our clubs. I know.”

“Exactly.  I tried to say no to the guy who brought this, to give it back to him.  He was highly insulted and wouldn’t take back a ‘gift.”

“If only I could find a way to get in touch with Frank. He’d get us out of this.”

“Don’t you know someone who visits him regularly in the joint that you could trust to deliver a note?”

“You kidding? Trust a wise guy? The only one I’d trust with this is Frank Costello, himself, and he’s locked up.  I think all we can do now is put it in the safe here and see if we come up with any ideas. Damn, this is bad.” He slid the briefcase off his desk and walked to the back of his office. He held the case in one hand as he worked the safe combination with the other. He put the case inside and locked the safe again.”

“How would Wilferini know we were hurting for money for The Haven Show?” I asked.

“Well, yeah.” I sat in the chair on the side of his desk. “But he seemed to know we were pretty desperate.  Do you think there’s a mob associate in our cast or crew?”

“Hmm. Possible.  You need to be careful what you say around your people. But it could simply be he knows all the nightclubs are hurting these days.”

“He has an idea what the show is gonna be like.  He called it disgusting.”

There was a knock at Max’s door. Max got up, opened his desk drawer, and checked the gun. “Okay, open it.”

“Don’t shoot anybody,” I whispered.

I opened the door and Lucille stepped in.  “Excuse me for interrupting, but someone’s on the line for Al.”

“The person wouldn’t say.  Just that it was important. Oh, and Max I brought you these personnel files. Kill two birds with one stone…”

I went into my office and picked up the phone. “Hello, Al Huffman here.”

I slammed my door closed and locked it. “Juliana?”

“I can’t talk long. Richard always has an eye on me.”

“We’re shopping and Richard…Well, we’re at the pharmacy so…

“I hopped into the phone booth here, but I have to be quick before he misses me.”

“Sorry I couldn’t meet you before the show. I did get your note. But Al. The automat? Dangerous. Everybody goes there.”

“A family thing. He’ll only be gone over night…”

“I had a special rehearsal scheduled…

“At the theatre…he’d be away, but it was canceled. I haven’t told Richard.  Can you meet me?”

“Yes! Yes! Wherever you say. When?” I crossed one leg over the other.

“It’s so good to hear your voice.”

“You too, Jule.” The urgency of my body calms. I uncross my legs.

You can’t tell a soul. Promise?”