Innocuous Songs that Were Banned in the 1950s – Vanda
3

Innocuous Songs that Were Banned in the 1950s 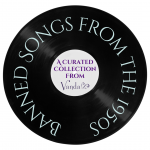 To put you in the mood and the proper framework for the forthcoming Book 5 Pt2, I thought I’d send some songs that were banned during the 1950s. For most of them, the reason why is pretty hard to figure out.

To listen to the songs while you read, go to: https://open.spotify.com/playlist/4rxyojDl3ACKBVKkgcybiw?

The fifties folks got upset because this poor guy heard a party going on out in his living room while he was taking a bath. Well, wouldn’t you? I figure these party folks must have been strangers because most of us know when we’re having a party and don’t run out in the middle of it with just a towel on. But does the song really deserve to be banned? Now, if he ran out of the bathroom without the towel, banning might make more sense.

This one makes a little sense if you interpret the words like we would today. But Dean Martin didn’t mean that insulting thing you’re thinking right now. He meant his heart. Isn’t that sweet? It was his heart that was getting wham banged around.

(If you believe that one…)

The versions I listened to of this song were all music, but according to the man who wrote about the banning of this song, it comes with words. I couldn’t find the Dottie O’Brien version, and the commentator did mention that this song was sung by many men, but it wasn’t banned until a woman sung it.

This one is really hard to figure out. Sweet Rosemary Clooney banned? Listen to the words and see if you can figure out what upset the fifties grown-ups so much.

But I had a special relationship with Miss Clooney. (Well, in a way) She was my first. I was a little kid, and she was probably in her twenties. She had her own TV show, and I would sit real close to the TV and I think I might have done some ‘ooing’ and ‘ahhing’. She was my first my first female celebrity crush, and I guess someone should have recognized what was going on with me, but no one did, including me.

5. There Stands the Glass, Webb Pierce

I had never heard of this song before I began this research, but I liked it. It has kind of a country-western sound, and it’s about a guy feeling awful because his girlfriend left him. Oh, and he’s drinking to drown his troubles. That was the only reason I could come up with that they banned the song. The drinking. The words are never even off-color.

This is a beautiful and, I think, painful song to listen to.

If you are made aware that this one is an instrumental, your response to banning it might be, “Huh’?

It’s also interesting to note that West Side Story was playing the same year that this song came out and then was banned. The Fifties was certainly an age of contradictions.

I’ve always felt sorry for these kids. They do all the right things, but then they fall asleep. Now, they’re going to be in big trouble for doing nothing, but they can’t prove it. Haven’t they suffered enough? Did they have to ban their song too?

Charlie Brown? Give me a break? What could a cartoon character who could never get anything right do to hurt anyone’s morals?

I guess the reason why the Fifties folk would ban this one is pretty obvious, but if you don’t know this song listen to it. It’s a fun tune for keeping your feet tapping.

I liked it. Another toe-tapper. The singer takes his girl home to bed—that should tell you all about why the fifties would ban it.

For this one, you’ll have to look up the album cover because the banning had nothing to do with the song. What it did have to do with was the placement of one of the singer’s hands. But I’m telling you—You would have to have a really dirty mind to figure out what’s wrong with that picture.

Do any of the songs in this list or their reason for being banned surprise you? Let me know in the comments so we can discuss it!

I love this list because I know every song but one, and it is absurd these songs were banned. These are children’s tunes compared to many Black blues songs from the 1930s. Now that book banning has become a national movement again it is good to be reminded of how irrational and dangerous it is.

My first thought on a couple of these was maybe it wasn’t the song so much as the stage performance. In an era of sock hops, anything that smacked of hips gyrating or suggested sex in any way, usually got censored or banned.

I couldn’t find ‘Four or Five Times’ with vocals either, but there are lyrics out there for Dottie O’Brien and some people that did similar songs after her. Her version is slightly suggestive to begin with a man singing it. It devolves into a whole lot of ‘sounds’ after the intial short verse or two which could be very suggestive depending how they were sung. With a woman singing it, I can imagine why it was banned.

I looked at the album cover for ‘On Stage.’ Nothing struck me as being remotely untoward. If it’s the position of a hand, then it’s because it’s an all black male group and the bigoted white establishment at the time wanted to find something about it to take offense to to get it out of record store racks and off the airwaves.

These were the songs of my teenage years and where I lived they played on the radio and we could definitely purchase the records. My memories are they were controversial and some radio stations wouldn’t play them, but the word banned seems a bit strong and misleading. I think I know all the words to most of these songs.